We received lab results from the coyote that appeared to have died from anticoagulant rodenticide poisoning.  This coyote was found in weakened condition in Strawberry (El Dorado County) in early June and brought into Tahoe Wildlife Care.

It did not recover and was euthanized. 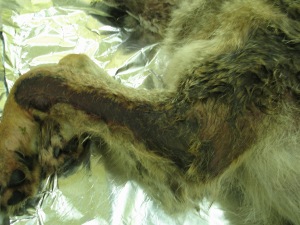 Rodent poisons containing brodifacoum can be purchased at grocery stores and hardware stores.  The U.S. Environmental Protection Agency has proposed limits on their availability but so far those limits are not in effect.

DFG urges residents to protect wildlife in their area by limiting use of products containing brodifacoum, bromadiolone, and difethialone.  These materials are the active ingredients in some rodent baits and have been found in a high percentage of our predatory and scavenging birds and mammals in California including hawks, owls, coyotes, foxes, mountain lions, and bobcats.

For more information on protecting wildlife from rodenticides, please read:

2 thoughts on “Results on the Coyote from Strawberry”