Imagine a creature with the body of a ferret, the tail of a lemur, the face of a fox, and the eyes of an owl. This animal is agile, elusive, and rarely observed due to its secretive nature.  Such characteristics must describe a mysterious creature of Greek mythology, Viking lore, or an American folk tale… right? Wrong!  What sounds like a fabled beast is actually a little-known, small predator that lives in California, the ringtail (Bassariscus astutus).

Also adapted for cuteness. Photo courtesy of the American Society of Mammalogists

The ringtail is an exclusively nocturnal procyonid (i.e. raccoons and their kin), which is why it is seldom seen and relatively unknown to all but the most avid wildlife enthusiasts.  It is a resident of California as well as the mountainous west, southwest, and south-central United States on down into Mexico. Preferred ringtail habitat consists of rocks, cliffs, and trees.  Similar to their procyonid relatives, ringtails are adapted for omnivorous feeding and exceptional climbing ability.  However, unlike raccoons, ringtails do not support themselves on the soles of their feet (plantigrade locomotion).  Instead, they have adapted to moving on their toes (digitigrade locomotion) causing some scientists to place them in a separate family (Bassarisidae).

The ringtail’s most noticeable feature is its long bushy tail, alternately banded black and white.  They use this tail for balance and abrupt directional changes while traveling.  Ringtails have fine dexterity, sharp eyesight, and acute hearing making them excellent hunters of small mammals, birds, amphibians, and insects; in fact, ringtails are the most carnivorous members of the family Procyonidae. Ringtails have semiretractile claws with hind feet capable of rotating at least 180 degrees – traits which permit a ringtail to cling to near vertical surfaces and scale trees and cliffs without difficulty.

The ringtail is known by many names including cacomistle, raccoon fox, and civet cat.  In California they are often called “miner’s cats.”  Miners and settlers often caught ringtails and placed them in their frontier mines and cabins to control rodents.  They quickly figured out that the ringtail is gifted with an innate mousing ability even greater than that of the house cat.  As ringtails became associated with mining operations, the name miner’s cat seemed to fit. 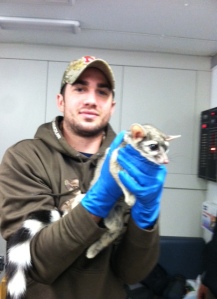 A ringtail examines the interior of our mobile vet lab while recovering from anesthesia after an exam.  The ringtail’s unique, long white and black banded tail is used for exceptional balance. (Photo by Robin Heagy)

As part of this year’s “Fisher Frenzy” fisher (Martes pennanti) capture, staff from the Wildlife Investigations Lab and the Integral Ecology Research Center (IERC) also examined other mesopredators that made their way into the traps.  Gray foxes (Urocyon cinereargentus), Western spotted skunks (Spilogale gracilis), and ringtails were caught in addition to fishers.

With funding from the US Fish and Wildlife Service Section 6 Conservation Grant program, the WIL has partnered with IERC to study disease exposure in other small carnivores that share habitat with conservation-vulnerable fishers. Our findings will enable us to better understand health threats to forest carnivores.

Four years ago, the Wildlife Investigations Lab was involved in caring for two mountain lion cubs that had been victims of abuse at the hands of poachers.  Now that the prosecution of the poachers has concluded, their story can be told. Many wonderful groups and individuals have been involved in this case, from the care of these lions to the legal prosecution of the offenders. Please follow the links below for their story details. 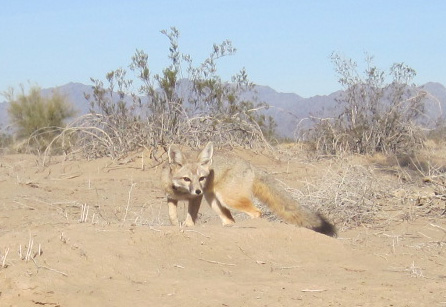 Working in California’s Colorado Desert can be a challenge, especially during the summer. Daytime temperatures can average over 115°F, and the evenings seldom provide relief from the heat. Another characteristic of this low Sonoran desert is that it typically rains during both winter and summer months. The summer rains are monsoonal in nature, sometimes creating severe flash floods. Luckily, the desert flora and fauna have developed physiological and behavioral adaptations that allow them to tolerate and thrive in such an unforgiving landscape. Because these adaptations are specific to desert living, many of these plants and animals are endemic, meaning they occur only in a certain area and no where else in the world.

One such Colorado Desert dweller we have in California is the desert kit fox (Vulpes macrotis).  Desert kit foxes are equipped with large ears and long limbs for easy heat dissipation and have developed several behavioral adaptations to tolerate desert climates. One adaptation is crepuscular activity during the hot summer months. Crepuscular animals are most active at sunrise and sunset–the coolest parts of the day. Another behavioral adaptation is burrowing and den building and many desert vertebrates and invertebrates are borrow-dwelling animals. 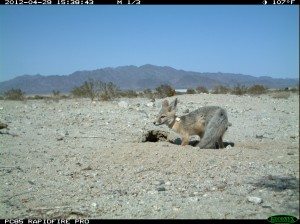 Look at those temps! A remote camera photographs a radio collared fox in California’s Chuckwalla Valley – part of the Colorado Desert. Here, this fox appears to be entering her den to avoid the 107ºF afternoon. Photo courtesy of David Elms from our Region 6 DFG office.

Kit fox burrows, or dens, can be extremely complex with more than 15 openings that wind and turn in various directions and can be more than six feet deep!  Other dens can be simpler and may just consist of one or two entrances. Kit foxes often build multiple den complexes throughout their home ranges, and will occupy them during various portions of the year. Biologists are still trying to understand when and why kit foxes chose certain areas to create dens, but one thing is for certain, kit foxes display fidelity to the sites they choose for den building. That is, they will continuously return to dens in their home range year after year, or at least visit them periodically to make sure no one else has moved in.

Wildlife biologist and veterinarian, Deana Clifford, listens for collared desert kit foxes using a hand-held antenna (also known as a “yagi”). The antenna is connected to a small, receiver that picks up the unique frequencies assigned to each collar transmitter. Photo courtesy of Jaime Rudd.

For the past year, Deana Clifford, the WIL’s wildlife veterinarian for non-game threatened and endangered species, has been investigating an outbreak of canine distemper virus occurring in desert kit foxes along the I-10 corridor of eastern Riverside County. Since the project began in January 2012, biologists have been monitoring the collared foxes using radio telemetry – a sort of biological hide-and-seek. Typically, biologists can find collared individuals by listening to the unique frequency each collar transmits. The collars our kit foxes are wearing have two settings: active and mortality. A mortality pulses at a faster rate than a normal signal if the animal has not moved for many hours. This allows biologists to locate and retrieve the fox carcass and determine the cause of death in a timely manner. In addition to radio-collars, remote cameras have been placed at kit fox dens allowing biologists to monitor their health and physical condition.

Throughout this past summer, thunderstorms surged through the Colorado Desert, resulting in flash flooding. While it is true that this is not atypical of the desert (as mentioned earlier), it can still cause some disruptions to an animal’s regular pattern of activity. Burrowing animals are especially vulnerable because their homes are susceptible to flooding. Moving to higher ground becomes a necessity to avoid being trapped and new burrows need to be established quickly in order to be protected from predators, competitors and the weather.  It was during this time that several of our collared desert kit foxes seemed to have “disappeared.”

When a collared animal goes “off-air” (meaning they cannot be heard via radio telemetry) and seemingly disappears, it is unnerving. As biologists, we have a responsibility to the safety and well-being of a study animal and we do not want the collar to be the reason for any mishap that may occur in the animals daily activities. Additionally, these animals are part of a disease monitoring collaborative and they provide us with very valuable information. Not being able to find the carcasses means information is lost, which undermines the purpose of this effort. After several unsuccessful attempts to locate the animals on foot, it was decided that what we needed was an eye in the sky. We called upon the professionalism of warden-pilot Tom Evans. With his help, we were able to take to the sky and listen for our “missing” foxes. Thanks to Tom and all of his experience in aerial telemetry, we were able to locate and recover our missing foxes. Amazingly, we were also able to clearly see the large den complexes our missing foxes created – from the sky!

A 2-element antenna affixed to the underside of an airplane wing. Often in radio telemetry the transmitter’s signal (in this case a radio collar) often travels upward, not outward. In flat areas, such as the desert, tracking animals can become difficult because gaining enough height to receive the signal is not always permissible. That is why aerial telemetry is an invaluable aid for biologist. Photo courtesy of WIL biological volunteer, Teri Baker.

You can read about what prompted the initial disease surveillance project by following our DFG News Blog. More about recent work can be found by clicking here.